Installing and using Rbkit is really simple, follow instructions below to get started.

Rbkit desktop app is released as pre-built executables for the Linux and Mac OSX platforms.

You can visit Downloads page to download Rbkit desktop applications.

Since Rbkit is a C extension it requires a C compiler and following tools:

Installing build-essential package on Ubuntu should install these tools and on OSX you can use homebrew to install them.

2. Installing via Rubygems or Bundler

You can start by installing rbkit gem via:

You can also add it to your Gemfile such as:

You can also install rbkit without Rubygems. This can be useful, if you are profiling a Ruby app where you want to measure overhead of Rubygems/Bundler.

You can download latest version of rbkit library from Downloads Page

This should install rbkit in ruby's site_dir and then you don't need rbkit added to your Gemfile for requiring rbkit.

Wherever you want to start profiling, add the following to your code:

If using Rails, and you want to measure everything from the boot process, a good place to put this would be config/boot.rb.

Now run your Ruby process (or Rails server if you are profiling a Rails app). 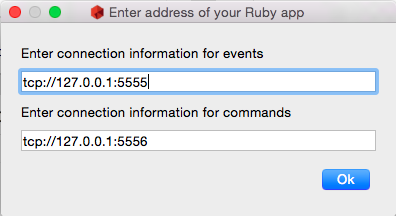 These are the default ports which Rbkit uses to communicate between the server and client. If you are trying to connect the client to a server running on the cloud and it's not able to, check if the server is behind a firewall that blocks communications through these ports.

Updated less than a minute ago